Anthony “Tank” Mansfield is an artist/illustrator/owner of Kneel To No One, who lives in Cincinnati, Ohio, but his story begins in a small town a few hundred miles away. Born in 1981, raised as an only child and thus forced to find ways to entertain himself, his days were filled with cartoons, sci-fi movies, pro wrestling, and comic books. His grandparents owned their own company and therefore he had access to a virtually unlimited supply of printer paper to draw on. During his teenage years, while his peers were discovering pop country and muddy trucks, he was listening to Misfits albums and buying HR Giger books.

Mansfield majored in Fine Arts Painting at Ohio University and later went on to earn a Master’s Degree in Art Education at The Ohio State University. After graduating from OSU, he found a teaching job outside of Cincinnati and moved to the tri-state area.

While he originally started his artistic career as a fine artist showing in galleries throughout the United States and internationally, he has since broadened his horizons. Not content to being pigeon holed into one medium he creates illustrations, murals, digital art, paintings, and performs live art at breweries, bars, and special events.

Mansfield’s free time is spent with his wife, Cincinnati Rollergirls Principal Owner Lauren Bishop, and their French Bulldog, Jett, avoiding the outside world at their home. His hobbies include jiu jitsu (he is currently a blue belt), drinking as many different craft beers as humanly possible, playing video games, and watching combat sports. He also occasionally leaves the house to watch a FCC game or go to a brewery. 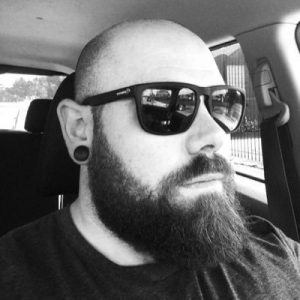